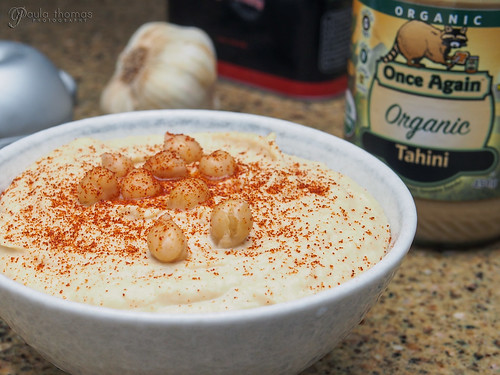 I’ve wanted to make hummus for some time but kept putting it off and putting it off and I have no idea why. It’s so easy to make and once I made it, I was hooked and have made it at least half a dozen times already this year. I first made it to snack on during the Superbowl, serving it with carrot and celery sticks. I’ve made a few different variations of it and like experimenting.  I had a tasty spinach hummus at Andalous Mediterranean Grill in Texas last month and am looking forward to adding some spinach to my next batch.

I’ve tried both a food process and a blender to make the hummus and found the hummus to be a bit creamier with the blender and is my preference.  Some people go through the trouble of peeling all the beans to make it even smoother but I don’t have the patience for that and don’t think it would make that big of a difference.

Below is the recipe I’ve used the last couple of times I’ve made it and it has gotten rave reviews from people, including Mark, who claimed to not like hummus before he tried mine. You can alter the amount of garlic and spice to suit your tastes. I prefer a garlicy hummus and usually use 3 garlic cloves.

1. Drain beans, saving liquid for possible use.
2. Combine all ingredients except garnishes in a blender or food processor and blend until smooth, adding a tbsp or more of saved liquid or water to thin.
3. Garnish with toasted pine nuts. paprika and/or garbanzo beans.
4. Serve with sticks of carrots and celery or pita bread or pita chips. 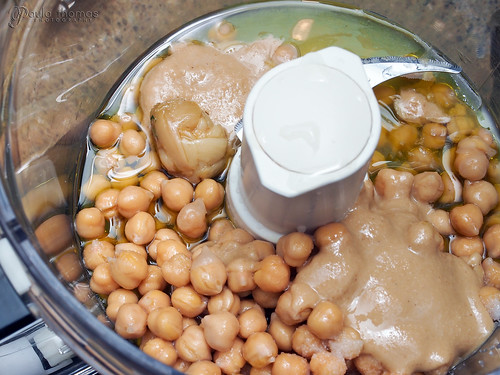 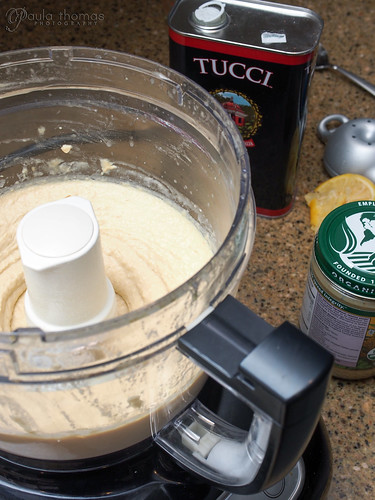