It was Michelle Newell that introduced me to Pine Creek Nursery via a Facebook post. I practically drive by it every day but never really noticed it before. I decided to visit one day after work a few months ago and picked up a few flowers for a container. While there, I signed up for their mailing list and I got my first newsletter a few weeks ago. They have lots of events from concerts to dinners.  Mark took me to their “Tastes from the Garden” four course meal (technically it was five courses) for a late birthday present. The dinner was outside, straight through the store on a lovely stamped concrete patio. They have a hardscaped stage surrounded by flowers and trees where they must have the bands play. There were several tables set up with place settings topped with a bouquet of rosemary and lavender. We didn’t notice until we left that there were name tags on the tables so we didn’t actually sit where we were supposed to but apparently the table we sat at was not reserved because it didn’t have one on it. 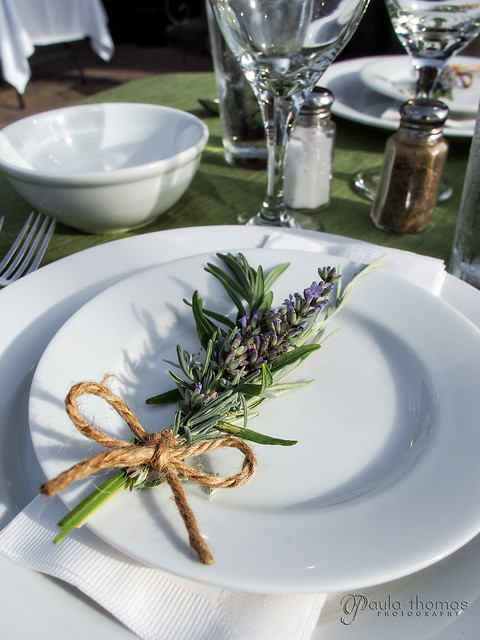 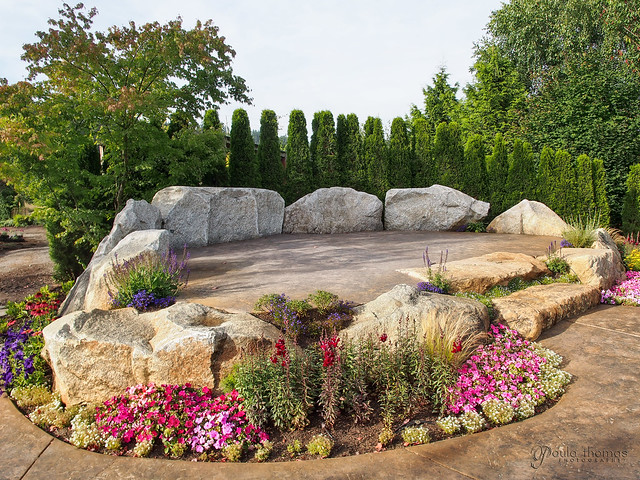 Each table was served a plate of homemade artisan bread with a bowl of compound butter which didn’t count as one of the courses. It wasn’t gluten free bread so I didn’t eat much of it but I did have a little taste just to try it and it was good. Soon after the bread was served, someone from Gregarious Cellars came by with a bottle of white wine. It’s not a winery I’ve ever heard of and probably very few people have. As far as I know the only place you can get it is at the nursery. They have a tasting room there that’s open Sat/Sun 12-5. Mark and I are not fans of white wines but it was the first wine that was brought around. You get one glass with dinner and we wanted to save it for a red so we didn’t get a full glass of the white but we did get a taste and we were pleasantly surprised. It was probably the best white wine we’ve had. It was a 2011 Roussanne wine which is a French grape that I’d never heard of. It was so good that Mark bought a bottle on the way out. Even though we really enjoyed the tasting of white we both decided to try the Syrah which is my favorite red wine and it didn’t disappoint; it had a strong pepper finish which is just the way I like it. We also got a glass of the red blend which was also good but we both liked the Syrah better. 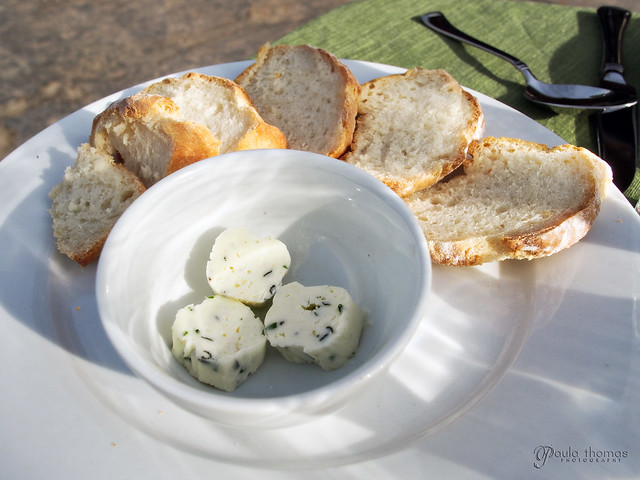 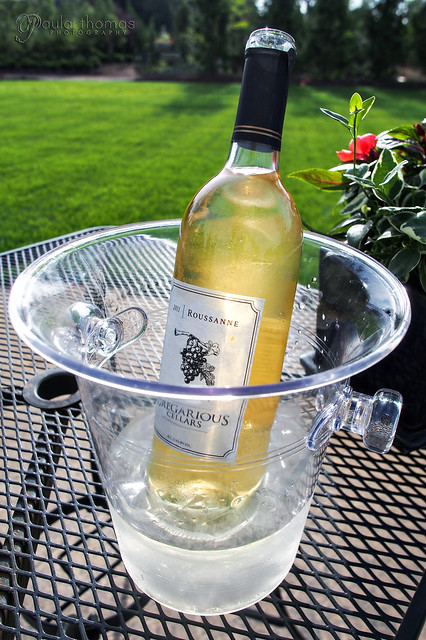 Chef Aaron Brown presented each dish and answered questions about each one. After everyone was served he would also go around to each table answering more questions and asking how everything was. 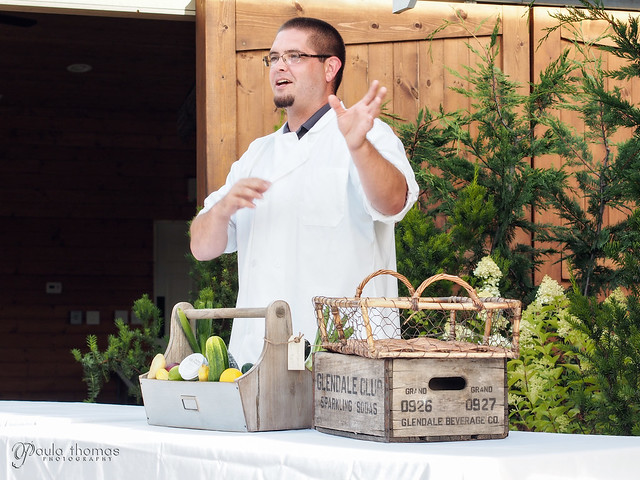 I enjoyed everything and most of the dishes were presented well with the exception of the main course. It wasn’t very consistently plated and if it were me I would have presented the chicken on top of the bed of rice. Mark’s was plated with the chicken and rice on opposite ends of the plate with about 2 inches separating them. Most of the dishes were made from scratch (except for the yogurt) and most of the ingredients were local (except for the chicken) with most of the vegetables coming from Willie Greens Organic Farm in Monroe. 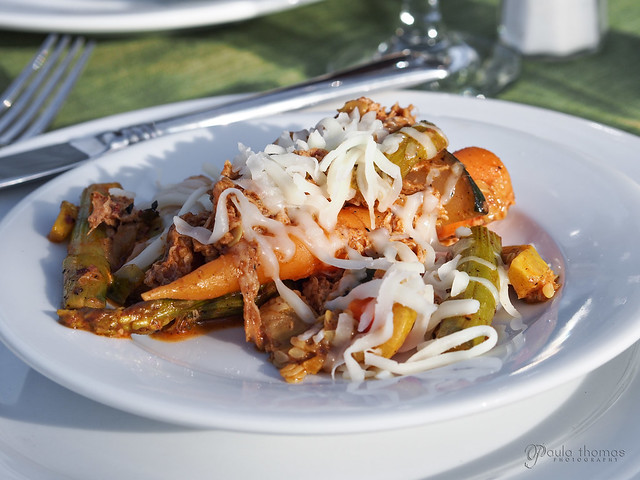 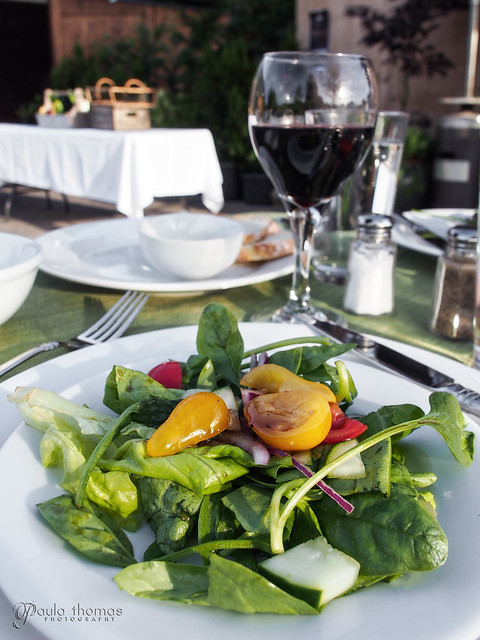 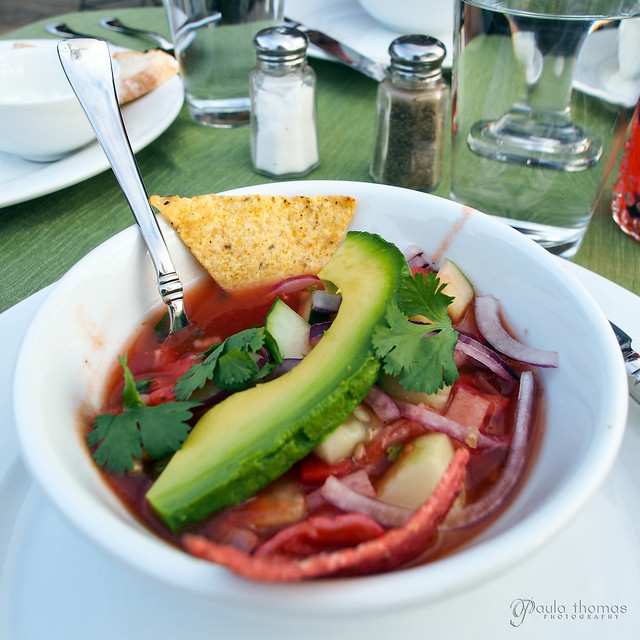 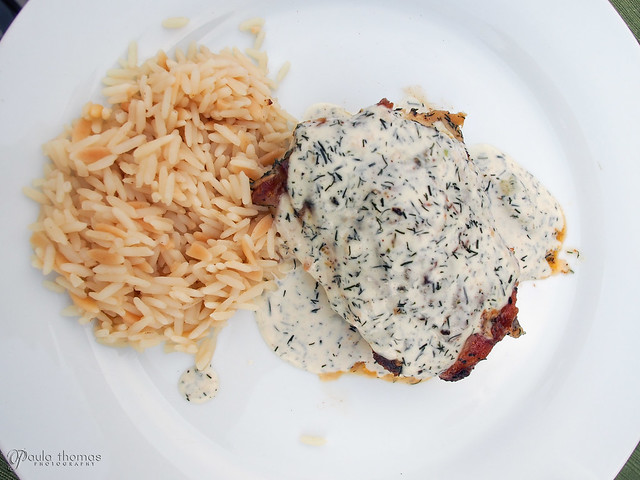 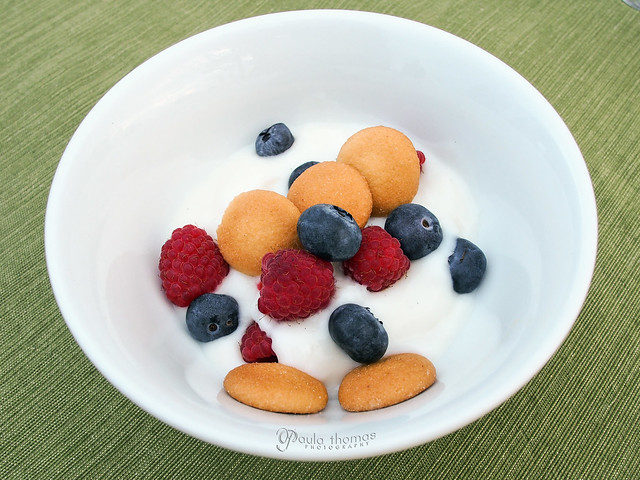 Yup, I just took this photo this week and you see that right, still one (actually two) pepper left in the unheated greenhouse and it has gone down to 27° F more than once. I just put up a full garden tour if you want to see what’s growing this time of year in our wet Western Washington backyard.
Happy Thanksgiving! I knew I put that rhubarb in the freezer for a reason! @call.it.christian claims it’s a must add to homemade cranberry sauce. I usually make fermented cranberry sauce but totally forgot. I gotta say it is pretty tasty! Might even add some to my next cranberry ferment.
I thought chickens don’t molt in their first year. Our 3 spring chickens didn’t get that memo. No eggs at all this month from any of our 16 gals. It’s a good thing we hoarded eggs in September. We’ll see if we can make it through this year’s egg drought without buying eggs. 🤞🏼
I decied to try my hand at making some Æbleskivers today. But not just any Æbleskivers, these are made with sourdough starter. They are a traditional Danish treat that is basically a puffed pancake ball with apple filling though not traditionally made with sourdough. I have only made Æbleskivers once or twice before but it has been many years and never with sourdough. I decided to dust off my Æbleskiver pan and give it a go. The trickiest part is knowing when to turn them. I made a big mess out of the first few but by the end they were coming out perfect!
Some blueberry varieties have the prettiest fall color. This is from the brigitta blueberry variety.
I’ve been waiting all year for pink radicchio. I first came across it from @localrootsfarmstore last year and had to try it. I got my seeds in January and planted in June. It takes some cool weather for the leaves to turn pink. All 4 of these were from the same packet and they all look so different. They are just starting to head up and turn pink. I hope there’s time for them to reach maturity before it gets too cold. It looks like @localrootsfarmstore is already starting to harvest theirs.
Look what’s trying to bloom in the middle of November! @haldengarden sent me some anemone and ranunculus corms to grow last year which did pretty well in the spring. I thought I pulled the corms out over the summer after they died back but this anemone managed to escape and is starting to bloom. I’m not complaining. I wish I had left them all in the ground. Ah well.
It’s not too late to plant your garlic but best do it soon. The @coronatools weeding trowel did a good job getting holes just the right size for the garlic. You can see what 8 varieties I’m growing and some differences between softneck and hardneck varieties in my newest video.
Does the corn you grow look like this? This is what happens when you have poor pollination. Most of this year’s corn came out fine but had a few ears on the ends that looked like this. The corn in the middle of the planting always grows best because it gets better pollination. That’s why it’s always better to grow corn in a cluster rather than a row and the more the better. Btw this corn is called Cascade Ruby Gold, a flint corn.
Happy #tomatotuesday! This is all that’s left of this season’s tomatoes. Which means the last tomato pic you’re likely to see from me for quite some time. I miss them already!
Even though most of the garden is put to bed, we are still enjoying meals from the garden. One of our favorite weekend meals comes from the garden: fried potatoes, onions, peppers, kale and herbs.
Isn’t this casper kale beautiful? It gets more stunning in cooler weather. I came across this variety at @bakercreekseeds and had to try it. Started it in spring and it was shaded all summer between the corn and zucchini and not harvested from until the end of the season. Hoping to be able to harvest leaves from it all winter. It doesn’t have a strong kale taste, more like a leafy cabbage. I’m always looking for new varieties of kale to try if you have any suggestions, let me know!