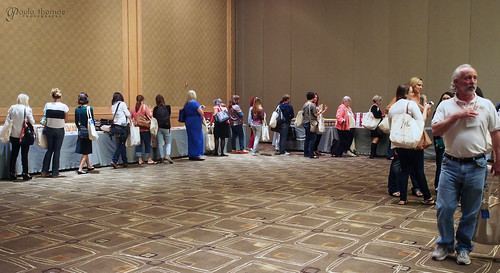 I signed up for IFBC 2014 right after the 2013 conference was over, excited that it was again going to be in Seattle. It was two days before the opening reception and I was getting excited, especially since at the last minute I got off the waiting list for the very limited space excursion at Sur La Table. It was shaping up to be a fun and exciting weekend of meeting lots of new bloggers, getting to sample tons of delicious food and learning new things from a wide variety of speakers. I couldn’t wait!

In one day my excitement turned to feeling like I was going to die and had to cancel my spot for the excursion and cancel my dinner reservation with Jean Layton from glutenfreedoctor.com. 😦 I came down with some kind of stomach issue Wednesday night that had me bedridden and unable to eat for several days and am finally starting to feel better, a week later. The jury is still out on what my problem was. I visited the walk in clinic twice and got 2 bags of fluids during my second visit which made me feel a little better. They took blood tests and UA tests all of which didn’t really tell them much of anything. I’m still waiting for the stool test results to come back in hopes it may show something but since I’m starting to feel better it may not really matter. At least I can eat now.

It wasn’t a total loss though I did manage to pick myself up and drive an hour to the opening reception which was maybe not such a good idea given my condition. I wasn’t having any sinus issues so don’t think I had anything contagious but I had very little energy at that point and unable to eat. I had planned on getting cheaper parking at the Warwick but didn’t think I could walk the couple blocks there and back and since I hadn’t planned on staying for more than an hour I just parked at the Westin where the conference was being held.

I dragged myself from the car to the reception hall where there was a line of people waiting to get in for the food, but food was the last thing I was thinking about other than wishing I could have it. Unfortunately though, I had to walk by it to get to the gift suite which is what I was really there for. Call me selfish but I paid for the conference and couldn’t eat anything and didn’t have the energy to do much socializing and I wanted to get something for what I paid for. 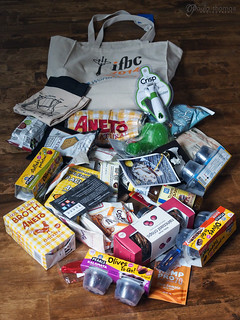 The gift suite was in a MUCH bigger room than previous years and seemingly more organized unless I was too late and missed all the frantic pushing and shoving. Tables were lined up all around the outside of the room and a smaller circle of tables in the middle of the room with more goodies. It appeared some things had already run out before I got there though I didn’t think I was that late. I missed out on getting to try some of Sahale Snacks new flavors and was the sponsor I was most looking forward to getting goodies from. I heard people were grabbing their stuff by the handfuls but others said there was a rep handing them out one per person. Maybe that changed when they saw people were taking too many. Anyway, it’s a great company with a great product and I had such a good time with them last year touring the Sahale Snack factory.

I didn’t leave without meeting at least a couple of new people though. The two people in front of me in the gift suite line were both from the same area as I am in the Snohomish Valley and I got their cards. I had new moo cards all ready to go for the conference too and forgot them at home so had to hand out some older non-food ones I had with me. Oh well, at least I had something to give out. Kristi Kaiser from Inspiration Kitchen is also a food photographer and has some great looking recipes with beautiful photography to go with them on her site. I also met Kristi Rimkus from Mother Rimmy’s Cooking Light Done Right who also has a blog filled with good looking healthy recipes and some great pictures too. It was nice to get to meet them briefly and hope to stay in contact with them.

I was able to attend the conference virtually through social media but it just wasn’t the same and watching all the awesome looking food I was missing out on and that amazing Sur La Table gift bag people got was a little rough but I’m glad everyone had fun and hope someone lucky person was able to take my place at Sur La Table. Hopefully next year I’ll actually get to go for more than an hour.

Happy National Potato Day! I let several volunteer potatoes grow this year and harvested the first one this week and ended up with some nice looking spuds. I’m guessing these may be the result of some true potato seed (TPS) that I grew last year from seeds saved from a neighbor’s potato berries the previous year.
Usually I get stuff to test out but this time @drycodegear sent some footwear for @maginashun to try. He has been wearing them around the property for the past couple weeks. They appear to be chickennproof. We’ll have to wait a few more months to test out their waterproofness cuz we haven’t seen any rain in several months.
Happy #tomatotuesday! These are the first of the tomatoes to ripen this year.
Almost time to start fermenting all the things!
Ugh my peppers keep falling over and/or breaking branches from all the weight of the peppers. Orange lesya is the most recent casualty. The first pod was just starting to ripen too. Need more tomato cages!
Today was bottling day for my first “traditional” mead. The only ingredients were water, maple blossom honey, yeast and yeast nutrient. Still have 3 other batches of meads aging and waiting to be bottled.
My Veronica started from seed just started flowering and I accidentally broke off the top. I sure hope it will continue to push out some side shoots of flowers. 🤞🏼
Have a patch of cone flowers that grow in the middle of the corn and potato patch. Not an ideal place for them but I can’t bring myself to move them. They give a patch of color to the green and attract the pollinators.
It’s #blueberryseason! Chandler blueberries look like they will be the most productive variety 3 years in a row. Picked 1.5 lbs today and more ripening up soon.
First fig of the season that the birds didn’t get to. I’m having to protect them with mesh bags this year. They got my one and only Brandon street unknown a couple weeks ago. Just shared my fig update and tasting video if you want to see more.
Happy #tomatotuesday! The 2nd variety to ripen is supernova. I had a tough time starting this one. It was a very sickly plant and I almost didn’t grow it but I found room for it and now it’s thriving. If you missed it, spoon was the first variety to ripen. A few more varieties are starting to show some color now too.
The peppers are growing but have only had one ripe pod so far. Some varieties are better picked green though like this shishito. I have a new pepper update up if you want to see how they’re all doing.