I attended the annual International Food Blogger Conference (IFBC) in Seattle for the 3rd time. It would have been the 4th but you may remember last year I fell horribly and mysteriously ill the first day of IFBC and was unable to attend or do much of anything other than lay in bed all day and take a few visits to the walk-in clinic.

The past few years there have been some optional excursions before the conference and I was signed up to visit Sur La Table‘s test kitchen last year and was so bummed to have missed what looked like a pretty awesome experience from what I heard and saw on social media. I was ecstatic when I found out they would be doing an excursion for IFBC again this year. These excursions tend to sell out fast so I signed up the second I saw it was available to ensure a spot. For those that couldn’t get into this one, several other excursions were available to choose from.

There were buses that left the hotel to take everyone to their excursions. All the buses arrived and left except ours. Unfortunately, the Sur La Table bus was MIA and we ended up taking taxes to their test kitchen in South Seattle, at least 10 of them. Fortunately we did have a bus to get back to the hotel but the mishap delayed our excursion by about 45 minutes.

We had a cooking demo featuring one of Kitchen Aid‘s newest gadgets, a spiralizer attachment for their mixer. They made zoodles with an heirloom tomato sauce which we later got to eat. I have a cheapo plastic spiralizer and it works just fine. At first, I didn’t think I would have any use for yet another mixer attachment. That was until I discovered it is more than just a spiralizer. The attachment will also peel, core and slice an apple and other fruits and vegetables which was something I would actually use. The attachment is definitely going on my wish list. 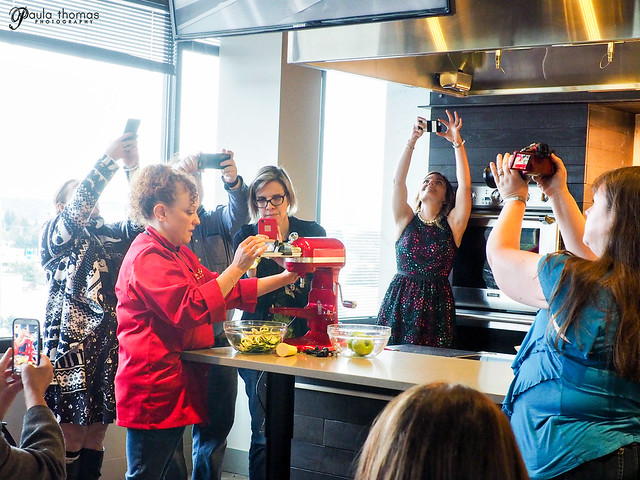 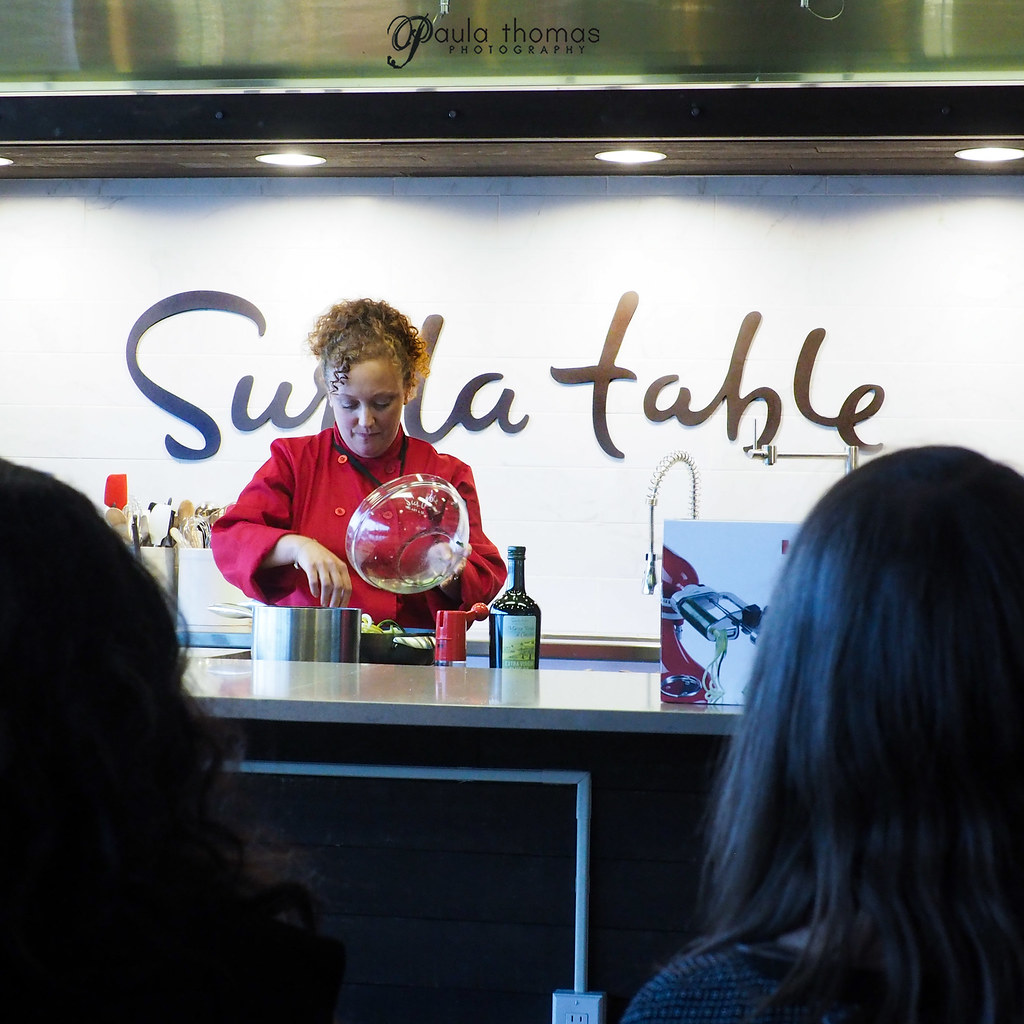 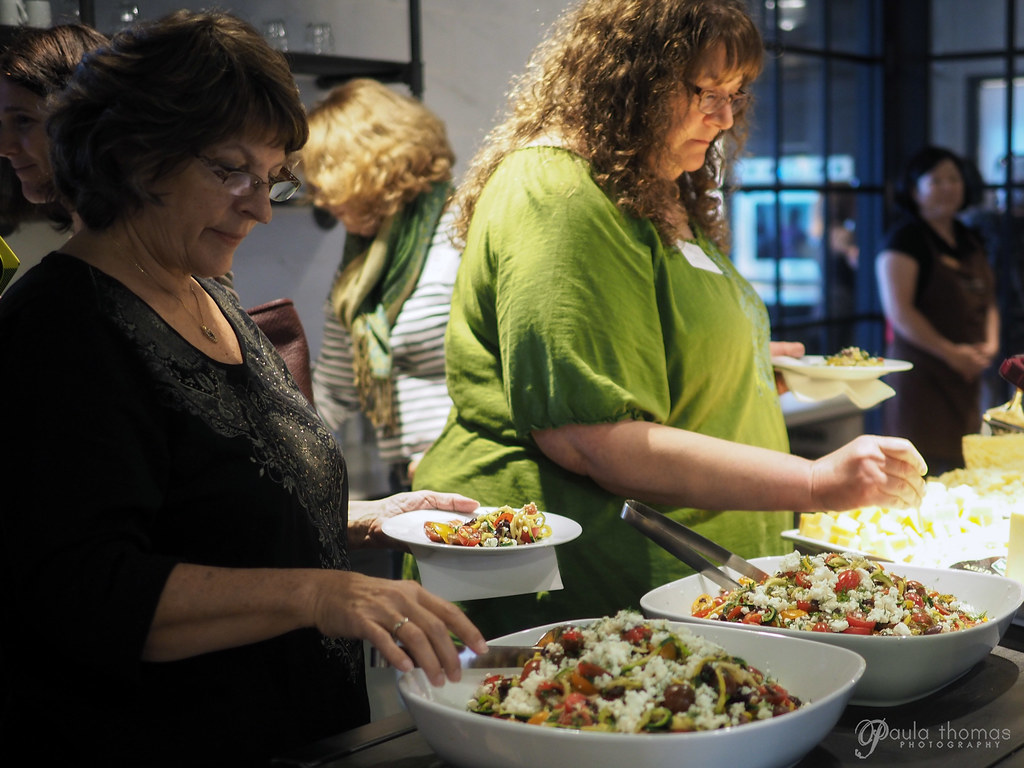 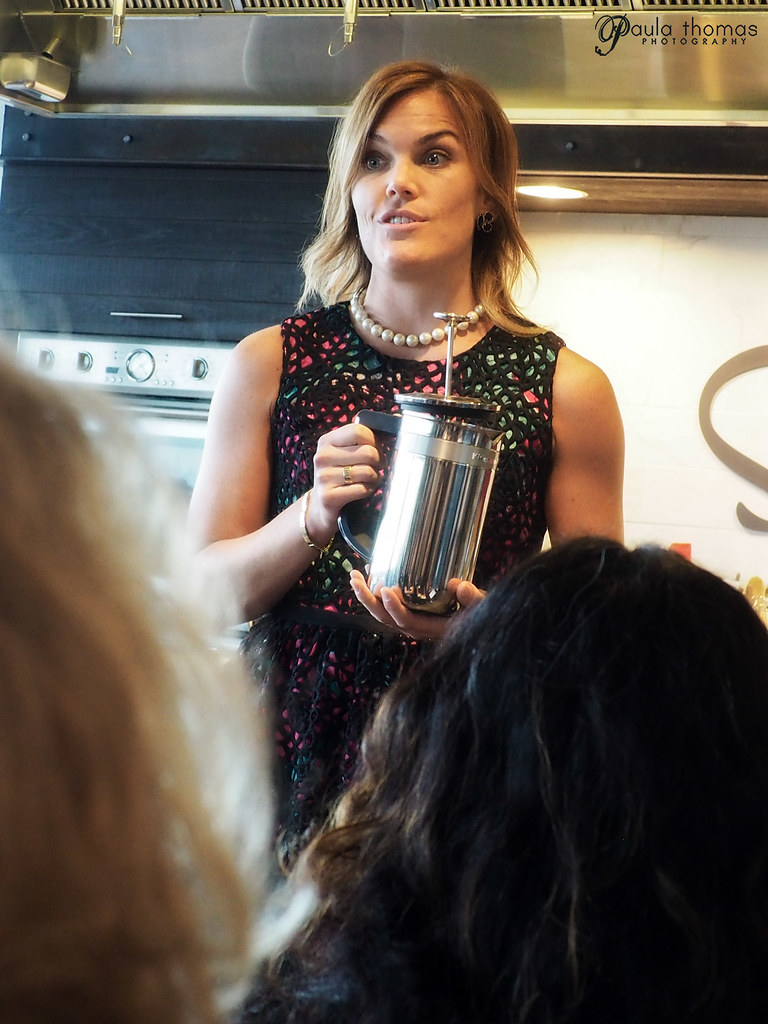 The other new product I was excited about was a coffee press that was just released this month. It’s not just any coffee press, it’s a stainless steel precision press that has a built in scale that weighs the coffee and water in grams or ounces. It has a built in timer too. All it needs is a built in coffee grinder and it would have everything. We came to find out that they gave all of the excursion attendees one of these coffee presses so I didn’t even have to put it on my wish list. I’m really excited to give it a try.

Kitchen Aid makes the only magnetic drive blender. If you look at the bottom of the blender jar it is completely flat. If you use a blender regularly you probably know the base of it is the first thing that gets worn out or broken. I had a Blendec for many years and I don’t know how many jars I went through. I finally decided to switch to a Vitamix after the 3rd or 4th blender jar. I’ve only had it a year and so far it’s holding up.  You know Kitchen Aid is proud of this product because they offer a 7 year warranty with the purchase. It will be interesting to see how it gets rated. If I start having problems with my Vitamix, I may look into this one but not ready to switch just yet. Vitamix has a pretty good warranty too.

They had tables full of products on display in the test kitchen and a lot of it was their Christmas season merchandise, lots of red colored things. We got to take home a Christmas themed Silpat which I already tested out to roast some cherry tomatoes. 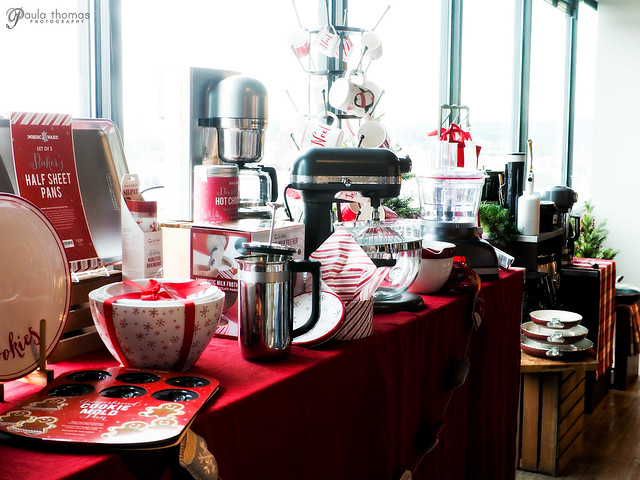 It was a fun excursion despite the late start. I would definitely recommend checking it out if you ever get the chance, maybe at a future IFBC if they ever have it in Seattle again. They always treat the bloggers well and send them home with a bag full of great goodies. 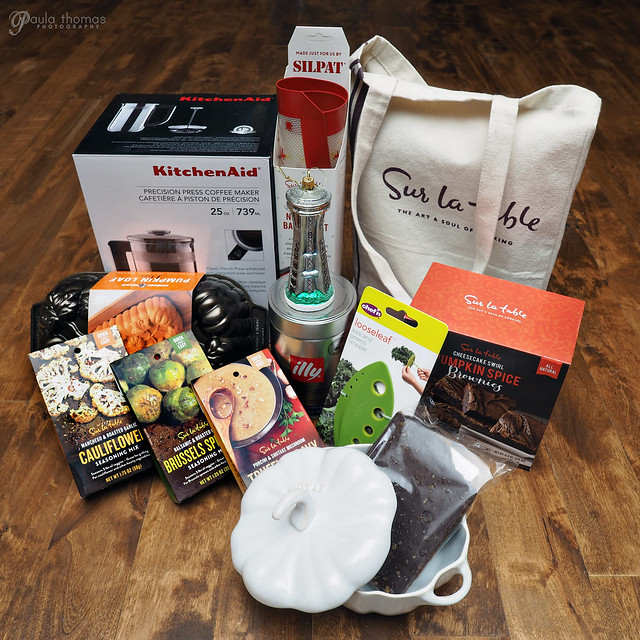 Happy National Potato Day! I let several volunteer potatoes grow this year and harvested the first one this week and ended up with some nice looking spuds. I’m guessing these may be the result of some true potato seed (TPS) that I grew last year from seeds saved from a neighbor’s potato berries the previous year.
Usually I get stuff to test out but this time @drycodegear sent some footwear for @maginashun to try. He has been wearing them around the property for the past couple weeks. They appear to be chickennproof. We’ll have to wait a few more months to test out their waterproofness cuz we haven’t seen any rain in several months.
Happy #tomatotuesday! These are the first of the tomatoes to ripen this year.
Almost time to start fermenting all the things!
Ugh my peppers keep falling over and/or breaking branches from all the weight of the peppers. Orange lesya is the most recent casualty. The first pod was just starting to ripen too. Need more tomato cages!
Today was bottling day for my first “traditional” mead. The only ingredients were water, maple blossom honey, yeast and yeast nutrient. Still have 3 other batches of meads aging and waiting to be bottled.
My Veronica started from seed just started flowering and I accidentally broke off the top. I sure hope it will continue to push out some side shoots of flowers. 🤞🏼
Have a patch of cone flowers that grow in the middle of the corn and potato patch. Not an ideal place for them but I can’t bring myself to move them. They give a patch of color to the green and attract the pollinators.
It’s #blueberryseason! Chandler blueberries look like they will be the most productive variety 3 years in a row. Picked 1.5 lbs today and more ripening up soon.
First fig of the season that the birds didn’t get to. I’m having to protect them with mesh bags this year. They got my one and only Brandon street unknown a couple weeks ago. Just shared my fig update and tasting video if you want to see more.
Happy #tomatotuesday! The 2nd variety to ripen is supernova. I had a tough time starting this one. It was a very sickly plant and I almost didn’t grow it but I found room for it and now it’s thriving. If you missed it, spoon was the first variety to ripen. A few more varieties are starting to show some color now too.
The peppers are growing but have only had one ripe pod so far. Some varieties are better picked green though like this shishito. I have a new pepper update up if you want to see how they’re all doing.