I’ve become addicted to seed swaps over the course of a year. There are so many different ways you can get seeds besides buying packets online or at your local big box stores. I can’t even count the number of seed swaps I’ve participated in the last year. I’m sure it’s over 20. I should really slow down because there’s no way I’ll be able to plant everything I have. Those of you that are new to gardening and don’t think you have much to share, it really only takes one packet of seeds to start. Some people will even freely give out seeds, asking nothing in return. I want to share with you all the various ways I’ve swapped or been given seeds.

If you’re in a relatively large city there may be seed swaps that happen right in front of your nose. We attended our first Snoqualmie Valley Seed Exchange this year. This particular exchange was free and open to the public.  You could join whether you had seeds to trade or not. There were many tables set up with seeds organized by type. They received seed donations from nearly a dozen seed companies for the event including: Ed Hume Seeds, Pinetree Garden Seeds, High Mowing Seeds, Johnny’s Seeds, Peaceful Valley Farm Supply, Baker Creek Seeds, Bountiful Gardens, Adaptive Seeds, Territorial Seeds, Wild Garden Seed and the Organic Seed Alliance. In addition to all of these seeds, people were encouraged to add their saved seeds or extra packets of seeds to the tables as well but it was not required. I donated some of my bean and mustard seeds and picked out several varieties of tomatoes, greens, radishes and herbs. This is an annual event here that I’m sure we will go to again in the future. 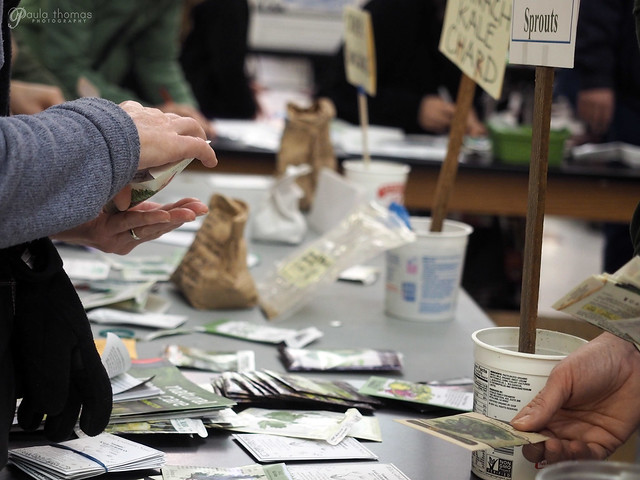 Another local group we participate in is called the Green Elephant Plant Swap group. They meet a four times a year and exchange everything from seeds, hardwood cuttings and plants. We’ve gone to several of those events and always bring home something exciting. 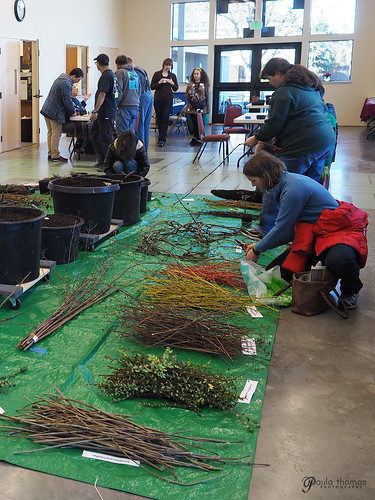 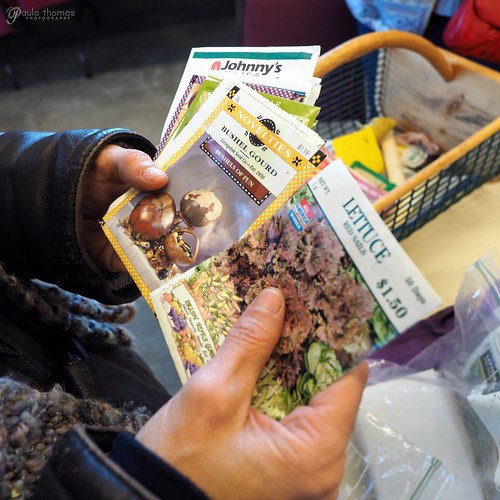 Earthineer is my favorite seed swap site. You can search for exactly what you’re looking for as well as post what you have for trade. You can then contact the person that has what you want and offer up a trade. I’ve done a few trades through this site by searching for some particular seed I was looking for. They also have an annual “pay it forward” event in February where you can list seeds or receive seeds for nothing in return and the recipient of the seeds is encouraged to plant and save seeds from whatever they get and pass them on to others next year.

There are a few other sites which I have not yet tried like HeirloomSeedSwap and GardenWeb Forum.

I have several gardeners I follow on Instagram and occasionally someone will post some interesting fruit or vegetable or a photo of their seed catalogs or seeds they just got in the mail and I’ll ask if they would be interested in doing a seed swap and 9 times out of 10 they will say yes.

Big Family Homestead is a youtuber that hosts a group seed swap with groups of 20 people. I’ve participated in a couple of group seed swaps like this and the way those work is you send in 20 (or however many participants there are) packets of seeds to the seed swap host, as does all the other participants and then he re-distributes all those packets to everyone so you will get back 20 different packets of seeds and you don’t know what you’re gonna get till it comes in the mail. Those are always fun to do. I’ve also participated in a group swap via Instagram that fdclinton hosted which had 14 participants. Below was my submission to that swap.

If you know of other sites or ways to swap seeds, feel free to leave your links and suggestions in the comments.