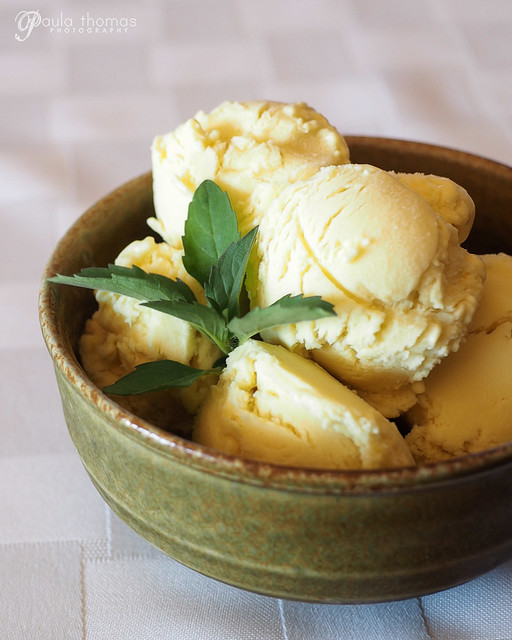 It’s been a while since I’ve used the ice cream maker. When I received a bottle of Azeite Esplendido olive oil in the mail from Seattle’s own Esplendido Douro, I knew I had to make ice cream. I’ve never made or even had olive oil ice cream before but is something I’ve always wanted to try. Ice cream is typically loaded with sugar but I wanted to try making one with honey instead.

Raw honey contains a lot of beneficial nutrients but many of those nutrients can be damaged or lost if the honey exceeds 100 degrees. I wanted this ice cream as nutritious as possible so I added the honey only after the ice cream was cooled down to around 96 degrees.

Olive oil also has many health benefits. It’s said to reduce inflammation and reduce the risk of all kinds of diseases. You can read more about the health benefits here. Esplendido’s olive oil is cold-processed to retain nutrients and made from pesticide free olives grown in the hills of Portugal, overlooking Douro Valley. In their first year of business they won a gold award from the New York International Olive Oil Competition. I’m not an olive oil expert but I have done an olive tasting before and can taste the difference between a good and bad olive oil. This olive oil is better than your average olive oil. It’s very fruity and I was pleasantly surprised by the peppery finish. It worked great in this ice cream recipe and would be a good olive oil to use for salads, dips, bread dipping or to finish off any meal. You can find their olive oil around the Pacific Northwest but are planning to expand to other locations in the near future. You can also order through their website if you can’t find it locally. 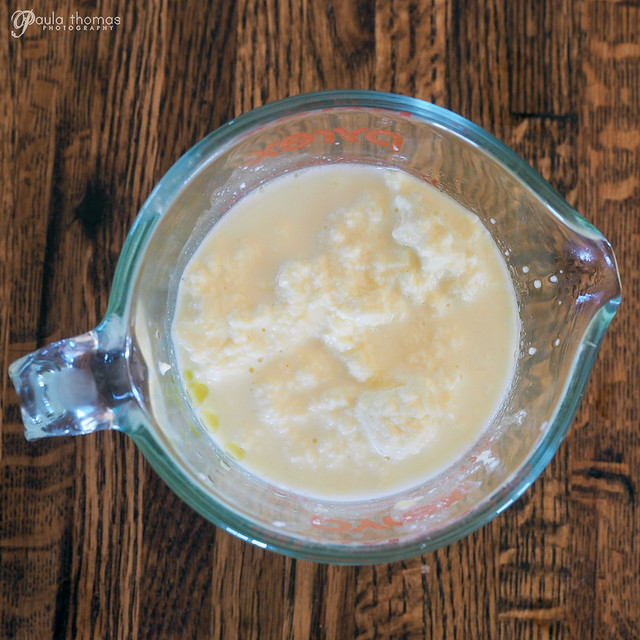 If you’ve never made ice cream before, it’s really really important you don’t overcook it, no really. I knew this. Yet, in my attempt to get a good photo of the temperature reading while it was cooking, I let the first batch cook a little too long and the result was a chunky, nasty mess. The first batch, it ended up going into the trash. The mixture went from perfect to chunky so fast. Luckily, I hadn’t added the honey and olive oil yet so I was just out a couple of cups of milk, some cream and egg yolks. The second batch turned out perfectly. 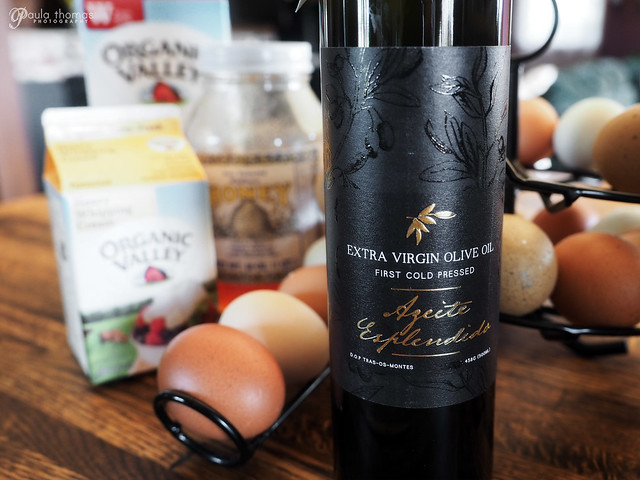 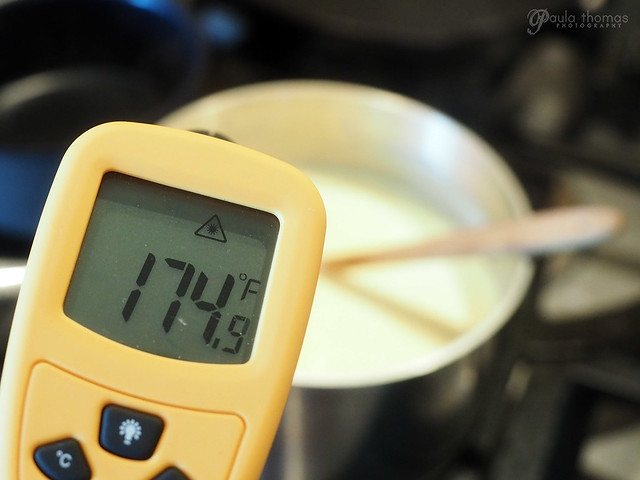 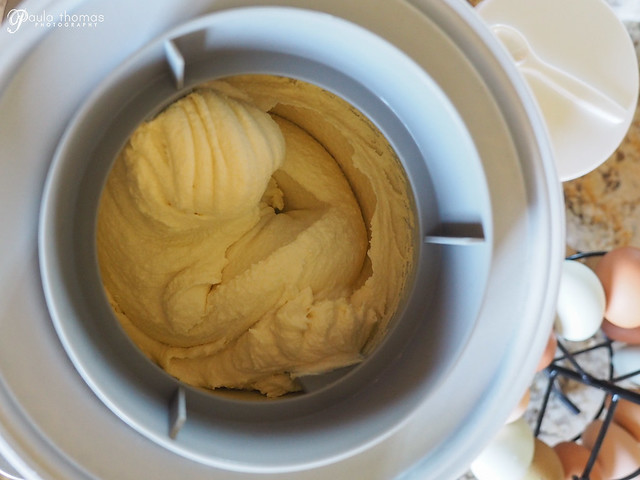 Disclaimer: I was provided with a free bottle of olive oil from Esplendido Douro in exchange for a blog post. All thoughts and opinions expressed are my own and not influenced in any way.

The first dahlia has bloomed! Many here dig up their dahlia tubers in the fall for safe keeping and split and replant in the spring. I’m a lazy gardener and don’t bother with that. Many times they don’t come back the next year because the rain rots them away. I surprisingly had good success this year and they all appear to have returned. This is one of several that came back from dahlias I planted last year from seeds I got from @mykitsaproots.
We’ve been putting this backpack sprayer @petratools sent us last year to good use. We don’t typically use herbicides or pesticides but on rare occasions and always organic. This sprayers primary use is for feeding the garden. I just sprayed some @iv_organics fertilizer tea on the figs and other stuff in the garden. It’s a great way to give your plants an immediate nutrient boost. You can find the new video on my channel. If you use code “gapey” you can get $10 off a Petra Tools sprayer. They have 1 gallon up to 21 gallons. They are an awesome addition to your garden toolset.
It’s elderflower season. I’ve been wanting to try making elderflower mead and this is the year. Our black laced elderberry is loaded with blooms this year so I harvested quite a few and left some in hopes of getting some berries. I bought a “laced up” variety a couple years ago to pollinate the one we have and this is the first year it has bloomed so we’ll see what happens. Do you grow elderberries?
Happy #figfriday! The June fig update is now up! It’s been a challenging year for a lot of fig growers in the PNW. Oour greenhouse has given the figs a nice head start but the ones in ground are far behind.
Happy #PollinatorWeek! What flower are pollinators most attracted to in your garden? The top two in our garden is Bee's Friend (phacelia tanacetifolia) and Borage. I'm not sure which they like more but if it's in bloom, you are sure to find bees on it. Borage seems to be favored more by honeybees and Bee's Friend seems to attract more bumbles. You can't go wrong with either one. Both of these flowers are annuals but self seed very easily. I have had bee's friend flower in spring/summer and reseed in fall and was surprised the fall plants survived all winter in zone 8b and started blooming in early spring. It was a big surprise to me how cold hardy they are.
The reinforcements are starting to arrive. The peppers in the greenhouse have started getting attacked and the preying mantis army is assembling. I have 3 egg sacks and today 5 have come to party.
It’s a beautiful day, for the moment. It’s been so rainy and more is on the way. There’s some minor flooding in the area from this last streak of rain. There’s rain in the forecast every day. Oh well it beats too much heat and drought. #beeyard #apiary #frontyardgarden #growflowers
Happy #fermentationfriday! The homemade wine collection is growing! Still have a few other batches to bottle up. Hoping to make an elderflower mead this year if I can get enough blooms but I kinda want to see if I can get berries this year. 🤔
Looking forward to growing these new to me dry pole beans this year. They were planted a little later than I would have liked and our crummy cold and wet weather isn’t helping. Dry beans take quite a while to grow and dry so I’m not sure they’ll do very well this year. Time will tell. These are nonna agnes, pale grey lavender and Karachaganack. Hoping it warms up soon.
My favorite columbine is always one of the last to bloom.
If you are looking for a native ground cover for a shady spot in your garden, look no further. We picked up a yellow corydalis from a local plant swap a few years ago and it has spread nicely over the years and the pollinators love it. It’s said to be for zones 5-7 but it has been growing great here in 8b for several years.
We went to a local plant swap this weekend and brought these sempervivums home to fill in some empty spots in this pot we found at a local buy nothing. It’s all filled up now.