The Hard Wok Cafe opened a location in Bellevue last summer after many successful years in Seattle’s International District. They serve Taiwanese cuisine, not a cuisine I’m very familiar with. I can only recall one other Taiwanese restaurant that I’ve been to, Facing East, which I also blogged about three years ago. It’s hard to make a comparison between the two because it’s been so long.

I may have been the only non-Asian in the restaurant which is always a good sign the food is good. I shared lunch with 4 other women from work. Most of them are Taiwanese and familiar with all the food on the menu and speak the language too. I did a little preparation before lunch, reading reviews to see what’s good and what’s not. This restaurant seemed to be most well known for their honey toast dessert. More about that in a bit. The dish I had in mind to order was the Ban-Uan, a pork dumpling that seemed to have good reviews. We all looked at the menu together and picked out 8 dishes to share. I will say it’s good to go with people who speak/read the language and are familiar with the food because you don’t always know what you’re getting by just looking at the menu. For example, what’s listed as rice cake with peanut powder also contains pig blood which some people may not be comfortable with. Luckily, I was warned in advance by someone at the table.

The food was ordered in, I’m guessing Mandarin, something I couldn’t comprehend. Turns out the dish I was wanting ended up being not available so they switched it out for something else and I had no idea what until it arrived at the table.

The food came out a few dishes at a time. The first two arrivals were veggies. The greens are a Taiwanese lettuce known as A-Choy which seemed to taste similar to bok choy. There was no sauce or spices in the sauté so was not all that impressed with the flavor. The other dish that came out was a more flavorful Vietnamese pickled cabbage. It didn’t taste like normal pickled veggies so they must have used some kind of Taiwanese vinegar and spices. I enjoyed the cabbage much more than the greens. 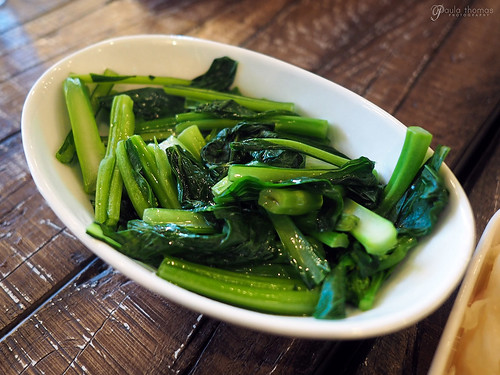 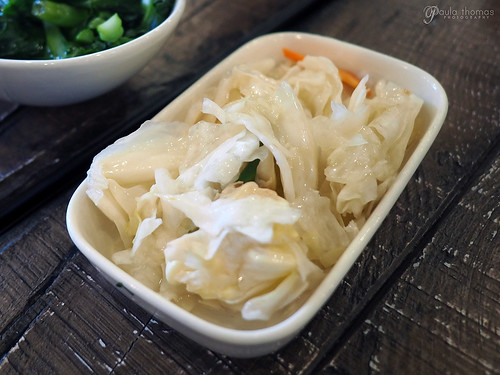 The next dish that came out was the surprise replacement for the Ban-Uan I had originally wanted. We ended up getting rice flour turnips (Uann-Quei) in its place. This ended up being my favorite dish (not including dessert) of the meal. I tried to google the dish to see if I could get more info on what is in it but I didn’t have any luck. The Taiwanese name for it is 碗粿 which I also googled and it seems more results came up but of course I couldn’t understand any of them. The other meat dish that arrived was a pork sausage wrapped in sticky rice sausage.  I can’t say that I’ve ever had a sausage wrapped in another sausage before.  The pork sausage was quite tasty but I wasn’t very impressed with the sticky rice sausage. The texture was kind of gummy and didn’t have much flavor. It was also not that easy to split among 5 people. 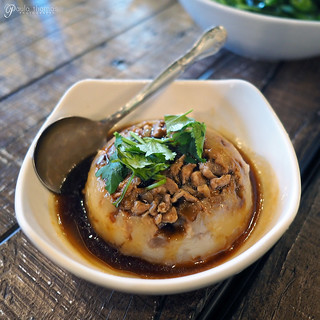 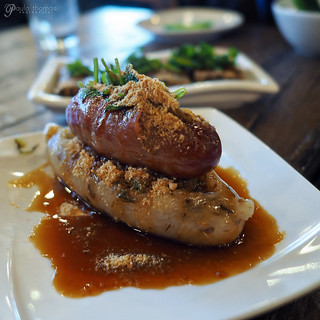 The next dish that came out was the scary porks blood dish. I don’t think I’ve had anything with pork blood in it before. I’m told the blood has to be super fresh in order to make this dish. We cut it up into 8 pieces and I ate one. It didn’t taste bloody or anything. I wouldn’t have guessed it had that as an ingredient. It wasn’t my favorite dish but it wasn’t too bad either. The crispy roll was probably my second favorite dish (not including dessert). It was slightly sweet and reminded me of a fresh pretzel, without the salt. The crust was nice and crispy while the center was soft just like a pretzel. If you’ve never had a fresh baked pretzel you are missing out! 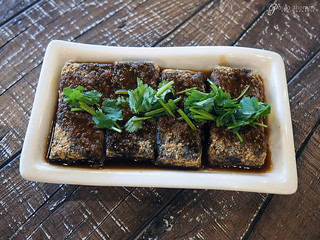 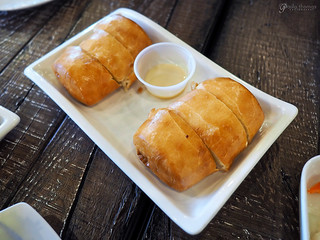 The last two dishes had the largest portion size. I read about the fried pork chops on Yelp and remembered seeing mixed reviews. One person said that it didn’t taste like pork at all. I’m not sure what they did to the pork but it was super tender and is probably why that person thought it didn’t taste like pork. It was seasoned well and was my 3rd favorite (not including dessert).

This brings me to dessert, what the restaurant is most well known for. Be sure to order your dessert early because it takes 15-20 minutes to make the beautiful and elegant honey toast! There are a few different toppings to choose from and we went with the matcha (green tea) and red bean topping. This dessert is huge, you need a party of 5 to even attempt the dessert unless all you order is dessert. I think it would actually make a pretty good brunch meal. I came across a video showing how they make the dessert. Basically they take a loaf of bread, cut out the insides, cut the insides into squares, slather it all with butter and toast it in an oven. The toasted squares are put back into the box and the toppings are added: ice cream, frosting, fruit, chocolate, cocoa chips and other toppings depending on which one you order. In case you couldn’t tell, dessert was my favorite. I want to go back and try them all! 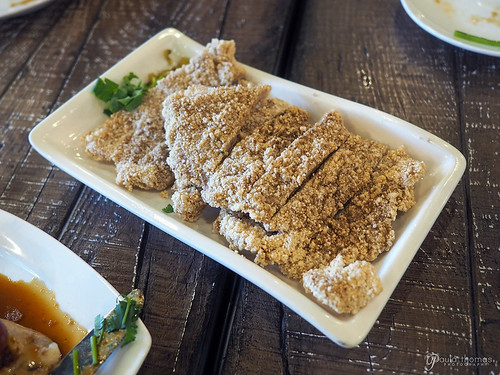 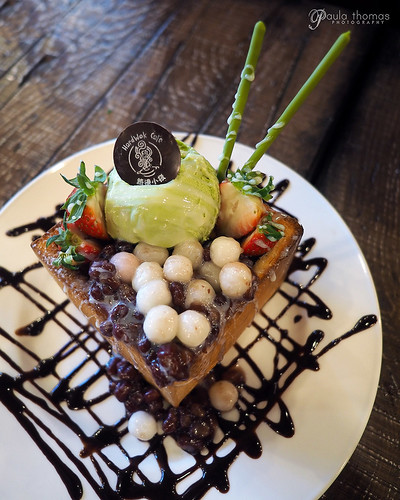