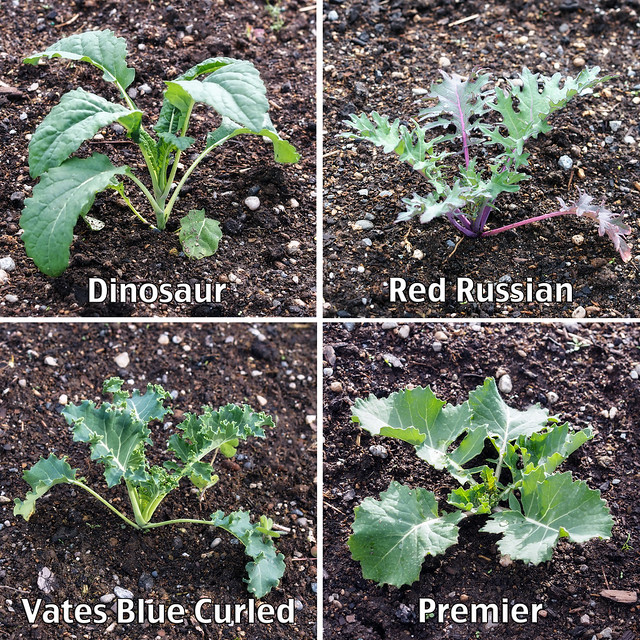 This is my first year planting kale however did have one variety (red russian) in the garden when I moved into the house last summer and it seemed to grow well. The previous owners of the house did not thin out the rows so they were pretty tightly packed. I’ll be giving them much more room to grow. Kale is one of the chickens favorite treats and I eat a lot of it too so it will be nice when the kale is big enough to harvest so that will be one less thing for me to purchase at the grocery.

I love having different varieties and who knew there were so many varieties of kale to choose from and so many names for the same variety. There are only a few that I’ve seen at the grocery store (dinosaur, red russian and curly). Baker Creek, where I got most of my seeds from this year, has 9 different varieties to choose from while Territorial Seed had 16! I narrowed my selections for this year down to 6. One of the seed packets I received was a “Wild Garden Mix” which I originally thought was a single variety but as the starts grew I realized it was actually a mix of three varieties. The varieties are not listed on the seed packet but I think I’ve figured out what they are (blue curled, dinosaur and red russian).

I started the Premier, Vates Blue Curled and Wild Garden varieties in early March and transplanted them in the garden a little over one month later. The Tronchuda and Scarlet was started in early March and will be ready for the garden in another couple of weeks. I’ve decided to put 4 of each variety in the garden so should have a steady supply of kale soon for salads, soups, stir fries, smoothies and chicken treats.