Over the past 4 months my flock of chickens has grown by 6 so I thought I would give an introduction now that they are nearly all grown up.

This is Agnes, a silver laced wyandotte. I always thought wyandottes were one of the prettiest breeds and they are also known to be one of the most docile and friendly. She joined my flock the beginning of October. She was delivered to me by a neighbor who was having trouble with her bullying his other girls. She’s a young girl that just started laying so I was happy to see if she would get along with my girls. We decided to just put her in the run with no introduction period to “give her a taste of her own medicine”. I was skeptical and a little scared she would get beat up. We kept a close eye on her and was surprised how well it actually went. They didn’t welcome her with open wings but there wasn’t much fighting other than Lucy but she likes to fight with everyone. Now they seem to be best buds and frequently hang out together when free ranging. Agnes held her own quite well and moved up the pecking order pretty quickly and has settled in around #3 or #4. She’s currently my most regular layer but is still laying her baby eggs that are much smaller than the rest of the girls. The first couple of weeks she laid her eggs in the chicken run but has finally figured out the proper place to lay them and now leaves them for me in one of the bottom nesting boxes while everyone else lays in the top boxes. I’m glad I was able to provide a home for her and that she didn’t end up in a soup pot.

The other 5 additions are now 4 months old and came to me as fertilized eggs from someone I met in a local chicken Facebook group. Bailey, one of my buff orpingtons, had been broody for 3 weeks and didn’t show any sign of breaking out of it. I saw a post on the group about someone having fertilized olive egger eggs for sale and decided to give it a try. I’ve been wanting to add some olive eggs to my already colorful egg basket. I brought 5 eggs home and gave them to Bailey to sit on. After being broody for 3 weeks, I wasn’t sure if she would be up for sitting on some eggs for 3 more weeks. I marked the eggs with a pencil just in case some more eggs happened to appear in her box and I’m glad I did because I found 2 more eggs in her box and was able to remove them.

On day 21 (July 29) all 5 eggs hatched. The day after they hatched I moved Bailey and the babies to a sectioned off corner of the chicken run with a brooder so the others wouldn’t bother them. After a couple of weeks I let the babies and mom out with the others, with supervision, until I was confident Bailey would be able to protect them. Luckily Bailey is the top of the pecking order and if anyone even looked at her babies they got chased away. She was a great mom and hope she will be able to raise more babies for me in the future. At about 2 or 3 weeks it was clear I had two boys and three girls. The boys got their combs and wattles well before the girls. Their biological parents are a black copper marans hen and either a blue or black Isbar roo. Only two of them look alike and the rest are pretty easy to tell apart. The girls should start laying in a couple months and the boys are now crowing like there’s no tomorrow and starting to get the urge to procreate. 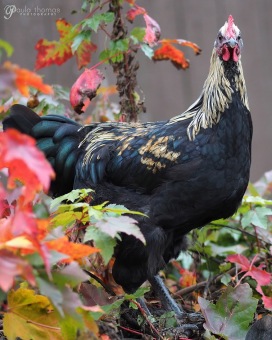 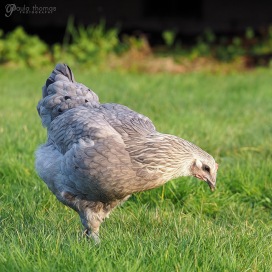 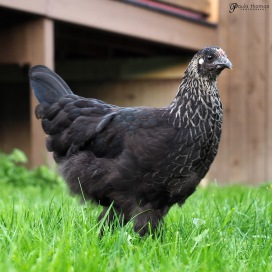 These violas are everywhere in the front yard. They spread super easy and for the most part we let them go where they want. They’re easy enough to pull out if they encroach on other plants. It’s a great ground cover and so beautiful when in bloom. The foliage isn’t bad looking either. What’s your favorite ground cover?
Has anyone grown Korean Dark Green peppers? The seeds were from @bakercreekseeds and 2 of the 3 plants have some variegation but far as I know they aren't supposed to be variegated but this is my first time growing them. 🤔 Have you grown them?
We were falling behind when things were blooming last year. But we got a heat wave over the weekend that got us caught up. Last two days we’ve had highs in the 80s which is very unusual for Western Washington this time of year. This pulmonaria is one of many flowers that just opened up from the heat wave. Just love the foliage on this shade loving plant and it’s deer and rabbit resistant!
The bees are filling up their boxes fast this year and this nice weather has them bringing in nectar earlier than usual. No one seems to know what they’re foraging on since big leaf maple isn’t quite in bloom yet. I put honey supers on the 2 front yard hives and one of the backyard hives so we’ll see what they bring in this spring. Got a new mated queen from @snohobeeco since the one I split a few weeks ago didn’t appear to raise one themselves. The challenge now is to not let any swarm and hopefully not split any until after maple is done. Splits during a main honey flow reduces the amount they make so I avoid it if possible.
Happy #flowerfriday! The fritillaria (checkered lily) are blooming. Glad I saw them before the slugs got to them all. They had already taken out a few of the blooms. Such a unique flower! 😍 What’s your favorite spring flower?
I’ve been working on a grow tent makeover. @official_marshydro gifted me a TSL 2000 to replace my old blurple Maxsisun to finish it off. You’ll be seeing more of this light in upcoming grow room videos. The unboxing and assembly is up now on my channel. Do you use LED grow lights?
I’ve been working on getting the annuum peppers potted up into larger containers. Only 18 more to go! This variety I got from Timothy Moltrup. He calls it Chloe’s sweet tangerine.
I decided to do an experiment after pruning some of my fig trees. Several of them did not fully lignify for the winter and were still somewhat green. I couldn’t find any info on if these type of cuttings would root so I gave it a try and this white madeira looks very happy so I guess it can be done. I like rooting in these clear cups so I can see the root development to help determine when to pot up into a bigger container. I keep the roots from light by keeping in a solid cup which also allows for bottom watering.
This white seeded samara lettuce is so pretty and is cold hardy too which I learned by mistake. The starts I shared yesterday all spent the night outside and got hit with a low of 26 degrees. Everything was pretty frosty in the morning but everything survived! I’d say they’re ready to go in the ground.
Been working on hardening off the first trays of starts this week and will be having a small plant sale. The summer starts will be available next month. I’ve got lettuces, kales, broccoli, celery, thyme and calendulas in this batch. I still need to get some of these potted up into 3.5” pots. Who wants some?
@maginashun found a cute potting bench at @secondusebuildingmaterials for my grow room! Just finished filling it up and getting ready to pot up some more peppers. Love it!
Look at how beautifully red this anemone is? @haldengarden sent me a great collection of them last year to try out and I get excited for each to bloom because they’re all different. Do you grow anemones?